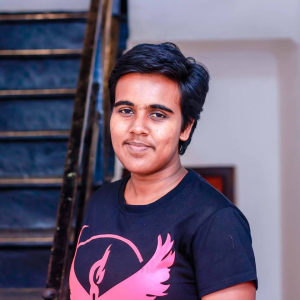 Cold. She was cold.

She curled up into a ball beneath her covers and shivered. It didn’t help. The cold wasn’t from the outside; it was inside her. She had forgotten how it felt to be warm.

Banging on the door.

Thud, thud, thud. Her heartbeat kept time with her mother’s shaking door, telling her to get her lazy self up.

She heaved the suddenly heavy cover off her and sighed. She was already tired. She looked at her arms, and tears welled up in her eyes. Hastily, she choked them back.

What was she supposed to do? Oh, yes, get up.

She got up, washed her face in water that didn’t feel as cold as ice the inside her.

Clomp, clomp, clomp, she stopped. People. Noises. Colours. Smells. Too much. She wanted to curl up on the floor and scream. She stood upright by the sheer power of her will.

Her heartbeat sounded like a war drum in her ears. How fitting, she thought, it was a war to her, after all.

In the kitchen, she sat down; she served herself breakfast. She watched her parents and siblings talking, laughing, smiling. She watched, but she didn’t. Her world was grey.

Her father turned to her.

Slam! She almost rocked back from the force of the disapproval directed towards her. When will you do something with your life, he asked.

Mute, she stared at him. She had no answers. If only I could tell you, she silently thought. If only you would understand.

She looked down at her rumpled pajamas, which she’d been wearing for four days straight. She didn’t have the energy to have a bath or change her clothes.

When she woke up, it was afternoon. The house was silent. She was alone. Nausea suddenly turned her stomach, and she ran for the bathroom with an energy she didn’t know she had.

Falling to her knees on the bathroom floor, she retched. Nothing came out. The house was silent, except for her dry heaving and eventually, her sobs.

She turned on the shower and sat there, fully clothed, letting it wash away every new tear that came. “What is wrong with me?” she cried.

An hour later, she dragged herself back to her bed. She looked at her phone, full of messages. Where are you, it said, did you cancel again, it said, do you not have a sense of responsibility, it said.

Sick of it all, she looked to her laptop. Look at how much work your friend is doing, it said. Look what they’re doing with their lives. Look how much they’re helping.

I don’t care, she yelled, I don’t care! She threw her laptop away and pulled on a t-shirt and pants. She needed to get out.

She tried to stop the tears once again. She will be strong, she told herself. And the lingering voice in the back of her head spoke. “You are not strong. You are not sick. You’re weak and pathetic, and a disappointment. Your family will be better off without you!”

She screamed, enough! She had enough. The railroad was close. She knew her destination.

She walked. And she was calm. Peaceful. Serene, for the first time in months. She knew what she had to do. She saw the railway ahead.

She saw a boy walk toward her. Saw his eyes flicker toward her arm. Her calm shattered, she braced herself. She cast her eyes down, waiting. Nothing happened.

She looked up. The boy was still walking towards her. He looked into her eyes and smiled. Good day, madam, he said. And nodding to her, he continued.

She walked on in a daze.

Good day, he said. He had smiled at her. It had been so long since someone smiled at her. Suddenly, she felt warm inside. It grew and grew, feeling like she was being set on fire from the inside. Unbidden, the image of a phoenix flashed through her mind. The fire was burning hotter and hotter, consuming her.

She looked ahead. She was right at the railway track.

She walked past it.

The chill creeps inAs I sit in the window.Smoke puffs fromThe chimney next door.Ivy covered in frostAnd icicles fall;December sinks